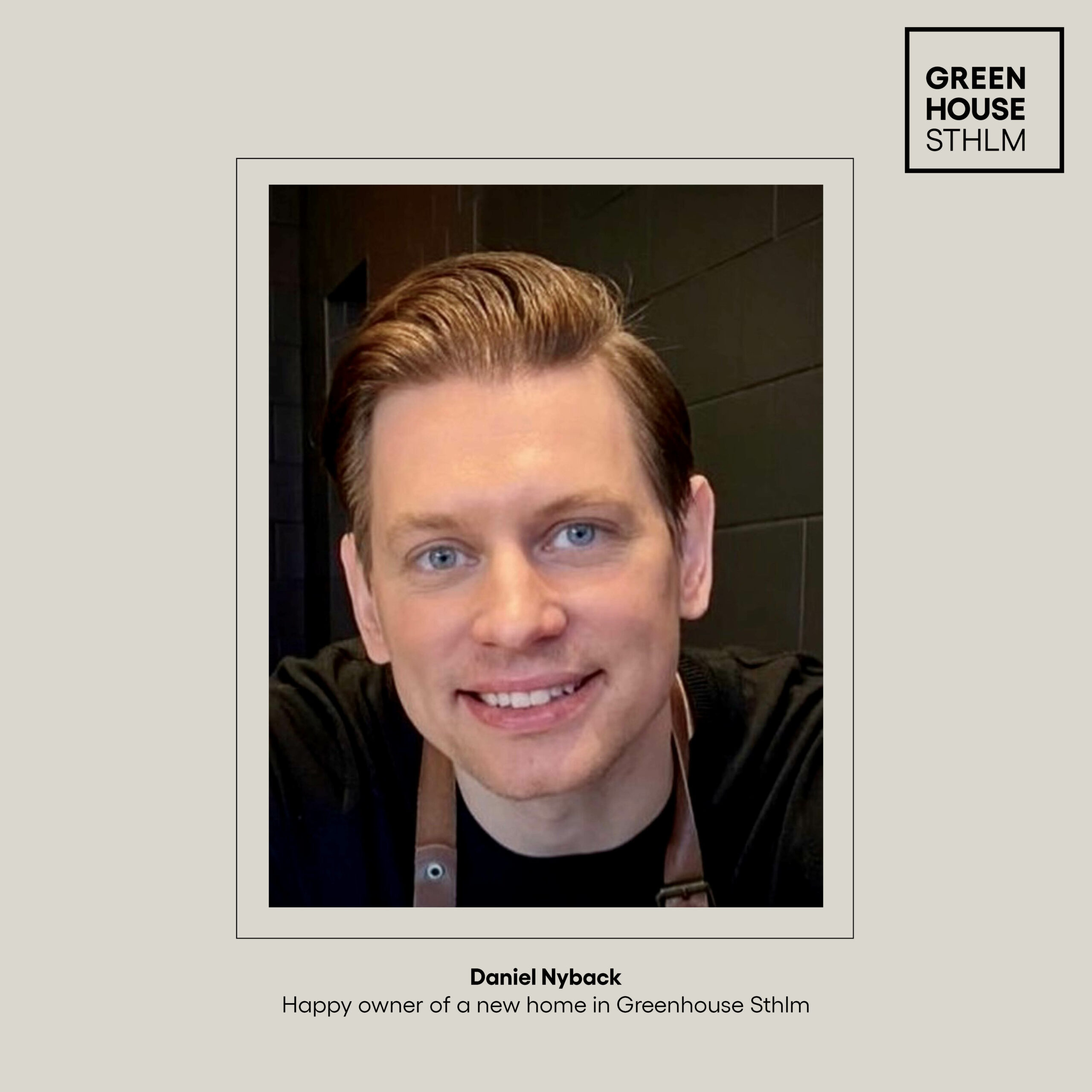 It’s been almost six months since we launched Brf Gourmet, the first housing phase in the Greenhouse Sthlm development. We have sold quite a few apartments and Daniel is one of the happy buyers. We asked him why he decided to buy his new home here.

Hello Daniel,
Nice to meet you! Tell us a little about yourself.

– My name is Daniel Nyback. I’m 34 years old and work with interior design at Newport at the department store NK. I’ve lived in Stockholm for most of my adult life and right now, I live a few blocks away from Greenhouse Sthlm.

How come you decided to move?

Environmental aspects are important, especially considering ongoing global warming and our need to do something about it. By moving to Greenhouse Sthlm, I take a step toward making a difference. Greenhouse Sthlm has a lesser environmental impact, for example, the reduced use of concrete is something I view as positive. Even if I had not lived near-by already, I would have considered moving further to live here.

It’s also exciting to be part of the overall rebuilding of the Stadshagen area. Stadshagen is a somewhat forgotten part of the city which will emerge as a whole new city district and it’s also smart from an investment perspective to buy in early when areas undergo this kind of complete transformation. I don’t think this opportunity will arise again in Stockholm. It’s also fun to be part of something new. There are not many similar alternatives in town, Daniel continues.

What was it with Greenhouse Sthlm that you fell for?

It includes so much! For example, all the facilities like the pool, gym, garden plots and the  padel court. I also like how you have thought about utilizing all the square meters,

which means that one doesn’t have to have a large apartment given the access to all the shared areas, such as the extra kitchen and the living room that is available to book. This is a great added value. I imagine that it’ll be nice to start with dinner and hanging out in the lounge and then finish the evening in my apartment or on the roof terrace, Daniel says with a big smile.

What are you most looking forward to when time comes to move in?

I was lucky to be able to get one of the top-floor apartments. So, it will be exciting to see the view and to experience the feeling of being so high up. It will also be nice to see the tree-lined avenue that is going to be built which will be a new boulevard in town. I also believe that it’s important to look at all the details when buying into a new construction project since you don’t really know what will be there when you move in. I did some research at the City of Stockholm, among other places, before buying and that made me see the potential of this project. Hopefully, I will also come earlier to work now that the subway will be so close to home, he concludes.

Thanks Daniel. We look forward to welcoming you to your new home once it’s time to move in!